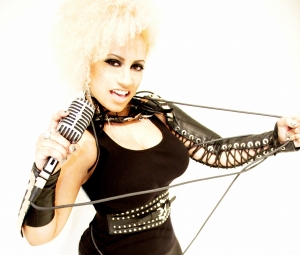 We’re back…for 5 opportunities to delve a little deeper behind the scenes of Black Women IN Rock.  We are excited to feature solo artist and lead singer of Judas Priestess, MilitIA.

SHEILA: How did the name, MilitiA. come about?

The spelling of it: “MilitiA.”  is to separate me from every other “militia” in existence.  It’s a popular word so I had to come up with a unique spelling of it to make it my own.  Interestingly enough, a male stripper turned American Gladiator tried to rip the name off me a few years ago.  I had met him in Las Vegas while doing Dee Snider’s Van Helsing’s Curse, next thing I know, he’s on the tele trying to rock my name… That show was cancelled and I think he’s back to exotic dancing and porn.  Thanks for the shout-out, dude.

SHEILA: How would you describe your brand of rock music?

MILITIA:  I’ve always had a problem with self-definitions…  If I had to come up with a hyphenated term to call my brand of rock music, I’d have to say: “Existential-Confessional Power Prog.”  HA!  And what that means is, it’s a swirl of concepts drawn from Existentialist themes, Confessional Poetry, Power Metal and Progressive Rock.  I’m an existentialist down to my core and my music and lyrics definitely reflect it- it’s raw, daring, triumphant and intense.  I always try to write from my most authentic, passionate, personal place; not necessarily saying things that most people would expect.  I strive to come up with new ideas that aren’t like anything else. It doesn’t make me the most popular artist but it keeps me real, goddamit. 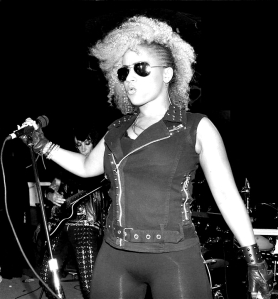 SHEILA:  Why did you choose rock?

MILITIA:  Rock chose me.  I’ve always been in love with it.  I love the raw power and intensity of rock and metal music.  I’m a junkie for it, for life.  My father is an avid record collector and he schooled me well.  He would send me to my room with a record- like Traffic, Iron Butterfly or King Crimson- and I would lay on the floor alone and listen to it and make movies in my mind that went along with each song.  Or if I really liked a song, I would play it over and over and act out the songs in front of posters on my bedroom wall as if they were watching me.  (What can I say? I’m an only child.)

SHEILA:  How have you been received by fans as a rock artist – both as lead singer of Judas Priestess and as a solo artist?

MILITIA:  Most people love Judas Priestess. And what’s not to love?? We’re the world’s only all girl trib to Priest.  People tend to dig girl bands in general but we definitely kick it up a few notches because of our musicianship and finesse.  Some people have told me that they didn’t even know Judas Priest’s music that well when they came to see us and they went home and bought some Priest albums.  That’s very cool.

I’ve sometimes wondered if my being black has ever been an issue with any of the fans of the music.  I’m sure it has to someone, somewhere… but I don’t give a fuck.  I’m a fan of the music too.  And I’m the lucky one onstage doin’ it.  If someone doesn’t like it, don’t watch me!

Original music these days is tough- between Swear On Your Life (which is on hiatus) and my solo stuff, it’s harder to get people to get what I’m givin because it’s unfamiliar.  Tribute has a built in audience.  However, those that get what I’m doing really dig it.  I have earned some stripes for slugging in out in the clubs doing original material for years, and the fans that I’ve gotten never cease to amaze me.  Some of them do really nice things to show their appreciation and it’s really somethin’- they ask for autographs, give gifts, bake treats, make artwork of me, they email me sweet messages, I’ve been asked to sing at people’s weddings, some do school reports and projects on me, etc- it’s astounding.

I guess some people are surprised to see me, this black female doing hard rock + metal music.  I frequently get asked if I learned to sing in church or if I sang gospel music and then switched to metal.  Ummm… no and NO.  But in all honesty, I’m not concerned.  I’m unapologetic about what I’m doing.  I’m a hard rock metal singer.  That’s who I am and what I do.

SHEILA: What are you working on now?

MILITIA:  Currently, Judas Priestess is about to release our first recording!  People have been asking for music so we decided to make it happen.  The first single is due out March 13th.

My solo band MILITIA will make our return to the stage at the “What Are You Doing Here?” book launch party on April 15th at Saint Vitus in Brooklyn.  The book is written by Laina Dawes and it’s all about black women in metal.  I am featured in it along with a slew of some very cool grrrls, you can order it here: http://www.bazillionpoints.com/black-women-in-heavy-metal/   Come to the party, it’s FREE!

I also write, blog, “Rock Goddess Recap”, direct webisodes and host events for Afropunk- the #1 destination for alternative black culture.  I am a spokesmodel for Manic Panic and host an alternative beauty webseries/vlog called “Militious Makeup”, also in cahoots with Manic Panic.

Other than that, I am always writing and creating…

SHEILA:  Who is your favorite Black Woman IN Rock?

MILITIA:  It will always be Tina Turner.  I saw her in concert when I was a kid and she was rockin’ out with all that leather and sweat and hair and skin and mouth and I said… “Yep. I wanna do THAT.”

Sheila Dianne Jackson is an award-winning author, biographer and CEO of Eve’s Lime Productions. She is Director-Producer of  the upcoming documentary, “Nice & Rough: Black Women IN Rock.”