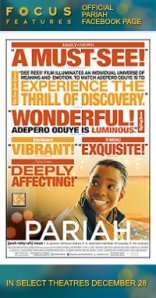 I attended several of the nominating committee screenings for the NAACP Image Awards.  And at each event, it would never fail that I would enter into conversation with someone who would ask what I do and about my current projects.  Naturally, the first thing out of my mouth was “Nice & Rough.” 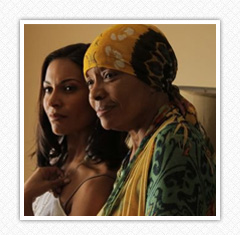 In this more conservative crowd, I came across people who were simply incredulous that black women in rock exist.  In one of many discussions, a  gentleman even challenged me as to whether Tina Turner could be considered rock n’ roll?  I mean…really?  I must admit I was a bit challenged by the fact that there are those of us who have such a narrow view of “us” that we cannot fathom a black woman in rock.  Nevertheless, I was excited to see two films that celebrate these complex, powerful sistas who, through this project, I have come to love and admire.

Ava DuVernay’s I Will Follow, chronicles a day in the life of a woman (Sally Richardson-Whitfield –left) who is grieving her aunt’s death (played by Beverly Todd –right).  Todd’s character is a professional drummer who’d toured with major rock bands back in the day.  Her strength, sense of freedom, and joie de vivre are hallmarks of the many women in rock I have interviewed to date.

Pariah, a film by Dee Rees, features the music of Carol Honeychild Coleman, and an onscreen performance by Tamar-Kali. Following the screening, I took the opportunity to thank Dee Rees personally and publicly for celebrating the music of black women in rock, in her film.  She cracked the door open for me by merely showing that these ladies really do exist. I felt such satisfaction, though I resisted the urge to give an “I-told-you-so glance” to those who had challenged my reality.  LOL….

There’s so much to be said for having reality reflected back to us.  That’s the power of film and of media, in general.  When people fail to see themselves reflected in the images set before them to represent them, well, you know how that story goes…..The bottom line is, this is the perfect moment for Nice & Rough to enter in and share this story that can no longer be denied.

Check out Pariah Soundtrack on iTunes.

Sheila Dianne Jackson is an award-winning author, biographer and CEO of Eve’s Lime Productions. She is Director-Producer of  the upcoming documentary, “Nice & Rough: Black Women IN Rock.”